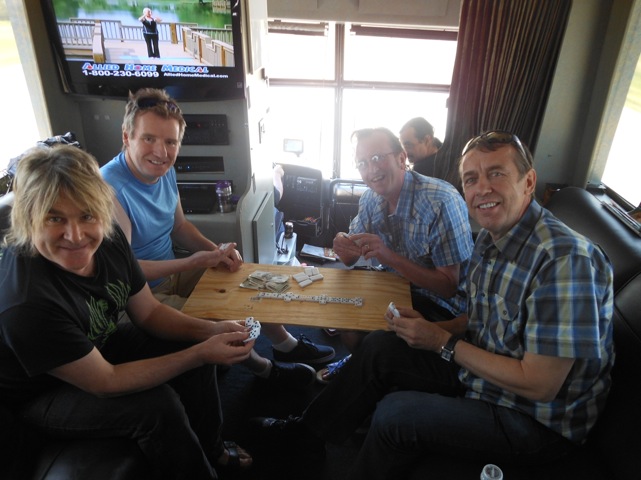 Well, boys & girls that’s the first week of the US tour in the can, and what a week it’s been. We landed at Newark and were met by our good friend John as well as Mickey and Jan (our new crew). The bus is fully stocked and we’re ready to roll. We have no day to acclimatise and have two shows in one day. First show is in Philadelphia in the afternoon, the second is the Wunderbar in Asbury Park.

The baggage handlers have been unkind to the guitarists. The bridge on my yellow fret king has been bent out of shape and is unusable. Jamie’s pickups have been bashed in, but are repairable. Had to play Philly show with bust guitar and used Mickey’s Strat with one working pickup for Asbury Park. Not ideal but the only other option would have been a washboard with a fuzz box. A quick visit to Sam Ash’s music store the next day unearthed a hidden treasure. $149 lighter, I came out with a fire engine red 1986 Japanese Squire. The guitar is a beauty and will certainly get me through the tour. Big thanks to Tom Kercheval for finding me EMG pickups in Leesburg.

Got chatted up by one of those cougars again, the last time this happened was in Manchester on the UK tour. Not sure what these older women see in me, I’m 52 with a face like a bulldog chewing a wasp, but it’s good to know that I still appeal to the fairer sex. The fact that she had a white stick and was licking double glazing at the time still counts in my book.

The Scottish contingent has now succumbed to bearing their milky white legs; Derek, Jamie and I are now bright red, with no trace of our blue complexion left. Yes the Scotsman abroad is alive and peeling.

We are taking no hotels on this tour apart from a day room each day for showers and so on. We park up near Walmart each day and get the supplies in, then fire the barbeque up. Both Jan and Mickey are experts at this and what they can do with a top sirloin is no one’s business.

Jamie and Mark spend so much time in these Walmarts and are now fully paid up members of the Walmartian club.

First purchase of the week was a blender, which Mike put to good use by making us his world famous ‘strawberry surprise, A cunning blend of blueberry, banana and cranberry certainly packed a punch but the cranberries were so tarte my underpants got sucked so far up my ass I thought I had been wedgied by a greengrocer from Rhyl. He is now known as Smooth Operator Mike.

We are now in the middle of a Journey from Indianapolis Indiana to Topeka Kansas, The pants are off and the dominoes are on the table.