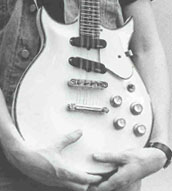 Many thanks to everyone who supported us on The Journey in 2013. As you can imagine there were many high points as well as some low points. The recording of The Journey was a pleasure. Maybe the stars were aligned or something as the chemistry was right at the time. The touring aspect was another kettle of fish. We spent 6 months on a bus touring the Western Hemisphere which is really a social experiment. Think ‘Big Brother’ on wheels. Not great when most of the band are in their mid 50’s.

2014 will take us on a new adventure. There will be no long tours, but we will still be playing frequently, playing the songs from our past with some rarities thrown in, the way we played them back then. Also, some new ones. As you know, Mike has departed and Simon has come on board. I won’t go into the gory details of ‘who killed who’ but there are 2 sides to every story. Simon is fully committed to Big Country this year. By the way, for all you Facebookers and YouTubers out there, we are not hiding Simon at the back.

The first gig in Clitheroe was a pub gig as a favour and he was moved back because he was blocking the fire exit (lol) and the Lemon Tree has a really small stage, plus the person who filmed it didn’t focus on him. That aside, the conspiracy theories have been hilarious. So anyway, let’s hope this year will be good. My resolutions are to have a convention in the summer, get more involved in this social media thing (I am not very good at it), and put together a Steeltown tour for the last part of the year.

We make no promises